About Us » School History

About the School
Gurdon S. Hubbard High School, is a public 4-year high school located in the West Lawn neighborhood on the Southwest side of Chicago, IL. It is part of the Chicago Public Schools system.

Gurdon Saltonstall Hubbard (Windsor, Vermont, August 22, 1802 – September 14, 1886 in Chicago, Illinois) was an insurance underwriter and land speculator. Hubbard first arrived in Chicago on October 1, 1818. At the time, Hubbard wrote, the area was "four and a half houses, a fort and a Potawatomi town." Beginning as a voyageur and fur trader, he would become a friend to the Native Americans, an adopted son of Chief Waba of the Kickapoo, husband to Watseka, niece of Chief Tamin of the Kankakee, a financier and land speculator, the builder of Chicago's first stockyard, and Chicago's first insurance underwriter.


The Indians called Hubbard "Pa-pa-ma-ta-be", which translates as "Swift-walker." He got this name after walking 75 miles in a single day to bring settlers in Danville back to Chicago to help fight off a threatened Indian raid. When a local Indian tribe questioned his ability to perform this feat, he challenged their champion walker to a race. Hubbard's challenger lost by several miles and was unable to move the next day. Hubbard seemed to be unaffected.

Hubbard also left his imprint on Danville and Vermilion. By 1828, while he was living in Danville, Hubbard had bought out the entire Illinois unit of the American Fur Company and was known throughout the state.

Presently the fur business began to wane, so Hubbard began to haul produce and pork to the garrison of Fort Dearborn and the growing village around it. The route he followed became known as the Hubbard Trace, which the present Dixie Highway (Illinois Route 1) parallels closely.

Hubbard started the route in 1822, but first ran it south to old Fort Vincennes on the Wabash River in Indiana. When he extended it northward, it came into Chicago by the present Vincennes Avenue and on into the present State Street, thereby reaching Fort Dearborn, which stood along the Chicago River at the present intersection of Wacker Drive and Michigan Avenue.

While living in Danville, Hubbard performed one of his greatest feats. He was in Chicago on business during the Winnebago War when word came from friendly Indians that an attack on the fort was imminent. He offered to ride to Danville and raise the Vermilion County Militia battalion. Hubbard left Chicago on horseback at 4 p.m. in the rain. By midnight he had covered the 80 miles to his Iroquois post, where he obtained food and a remount. At Sugar Creek the horse refused the ford. Hubbard waited until daylight, saw that a huge fallen tree blocked the way, and swam the flood-swollen stream. He shouted his news at Denmark (now covered by the waters of Lake Vermilion) and at Danville, then rode two miles further to another settlement. He had covered 140 miles in 20 hours.

The next day Hubbard, with 50 armed men on horseback, started to Chicago's rescue. It took four days to make the trip. On arrival, he was made captain of defense; but the anticipated attack failed to materialize. In a day or two word came from Governor Ninian Edwards that the war was over. Hubbard also left his imprint on Danville and Vermilion County.

Hubbard worked as a meatpacker in Chicago and the first winter was so cold, he was able to store the pig carcasses on the banks of the Chicago River without worrying about them spoiling. He later built the largest warehouse in the Midwest at LaSalle Street and Wacker Drive to house his meatpacking facilities. It was all of brick and so large that it was dubbed "Hubbard's Folly." But the young businessman knew what he was doing. Soon, with two partners, he formed a trading company and established a line of lake steamers, serving Buffalo, New York and the upper Great Lakes.

In a corner of his second warehouse, Hubbard established the first bank in Chicago. It was here, too, that the first insurance policy in the city was written.

In 1834, Hubbard moved permanently to what he described as "that smaller town up on the lake." For most of the next 52 years of his life, he was to be identified with almost every progressive action of the growing city.

In 1835, on his own responsibility, he ordered the first fire engine from the East, underwriting its cost. During the same year, he and some friends built the first modern hotel, the Lake House, a three-story brick building at the corner of what is now Rush Street and E. North Water Sts., the block presently occupied by the north annex of the Wrigley Building.

As a member of the State Legislature from Vermilion County, Hubbard initiated plans for the Illinois and Michigan Canal. He persisted in promoting his bill until it passed in 1836. The canal was not completed until 1848. It linked the Chicago River with the Illinois River and opened the way to trade between the city and New Orleans. Hubbard turned the first spade of dirt.

Meanwhile he helped organize the St. James Episcopal Church, had been elected an alderman, had helped raise funds to build the Wigwam (where Lincoln was nominated for President) and had seen combat in the Civil War.

The Great Chicago Fire of 1871 nearly bankrupted him. Hubbard eventually paid all the insurance claims his company was liable for, but his interests never recovered from this catastrophe.

Today, Gurdon Saltonstall Hubbard is virtually unknown in Chicago, his name mostly associated with "Hubbard's Cave", an area where the Kennedy Expressway passes under a series of streets, beginning with Hubbard Street. Of course, there is also our esteemed Hubbard High School here in Chicago's south side community, and we hope for all of Chicago to remember Gurdon S. Hubbard through our achievements in the many areas of high school academia and athleticism.

Writing in 1881, A.T. Andreas stated that "only [Gurdon Saltonstall Hubbard] became identified with the modern commerce and trade of the city, who had been connected with the rude Indian traffic which centered in Chicago in the earlier times. 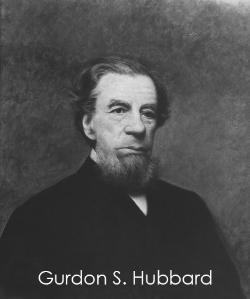